Whenever you are looking for a good LED grow light and you are stuck between two very good LED lights and you just cannot decide which one to u, it is one of the trickiest situations you will face. In our Mars Hydro vs Viparspectra comparison, we are going to try and solve that problem which many people might be having while selecting the LED grow light of their preference. We have done in-depth research in order to provide you with the best possible comparison and help you decide between the Mars Hydro vs Viparspectra to determine which will be a better pick for you.

In order to keep everything easily understandable for you, we are going to be comparing both the product lines segment wise. You do not need to worry about anything because in this Mars Hydro vs Viparspectra comparison, we are going to examine all the important aspects in a very detailed manner. However, before we can get into all the features and aspects, you need to know about the brands that you are dealing with here. As you need to know before making a choice for your indoor marijuana growing setup which one is better.

For starters, both the companies are based in China but both have their own warehouses all around the globe. As a matter of fact, Mars has been a very familiar name in the indoor marijuana growing and gardening markets because it has been offering quality affordable products since a very long time now. While Viparspectra on the other hand has also been in the market of indoor marijuana growing and gardening for a long time now supplying the people with compelling and efficient products.

Both the brands have been very successful in launching a large variety of grow lights and other tools and equipments that can be useful in indoor marijuana growing. Both their grow lights are available in the market under variants ranging from 200W all the way to 1200W. For our Mars Hydro vs Viparspectra comparison, we are mainly going to be focusing on the 240W, 480W, 720W, 960W from Mars and 300W, 450W, 600W, and 900W, from Viparspectra. Both of these brands grow lights that we will be focusing on are going to be belonging to the reflector series of the respective brands.

Let us now move towards one of the key aspects for comparison.

Build and Design of Mars Hydro vs Viparspectra:

It is ideal that an LED grow light needs to be a one time investment for your indoor marijuana setup. This is why we are going to be focusing on the design and build in order to find out the durability of the products and also the comfort of use which comes with these LED grow lights. While comparing the build, we are going to be taking the Mars Hydro reflector series 240W and the Viparspectra reflector series 300W into consideration.

First we look at the Mars Hydro reflector series 240W and we can immediately observe that the quality of materials are definitely up to the mark. That is not just it though, this reflector series 240W comes with a switch for two types of modes and it also has the feature for Daisy chaining which will help you seamlessly add more LED grow lights to your system with ease.

The separate mode controls are going to be resulting in being a big help in reducing the wastage of electricity if there is any.

When we look at the Viparspectra reflector series 300W, we observe that the company has made a fantastic grow light and there has not been a loose end on their part on the product whatsoever. This LED grow light has been made with sturdy and premium quality of materials and also has a very elegant design and all this definitely make this reflector series 300W a definitely worthy grow light to invest upon for your indoor marijuana growing setup. 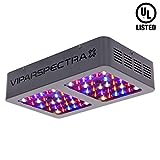 The Viparspectra reflector series 300W does come with a Daisy chaining feature on the backside in order to add more grow lights seamlessly without any hassle. However, this LED grow light does not come with a separate mode controller like the one in the Mars Hydro grow light.

Keeping all the things mentioned above in mind, we can conclude that the winner in this factor is definitely Mars Hydro since it comes with the separate mode controller and the grow light from Viparspectra does not.

The spectrum of Mars Hydro vs Viparspectra:

It is also important to mention that the Mars Hydro reflector series 480W uses 96 pieces of 5W LED bulbs made by Bridgelux and Epistar and on the other hand the Viparspectra reflector series 450W comes with 90 pieces of 5W LED bulbs made from Epistar. With the help of all these LED bulbs, both of the LED grow lights are going to be spreading quality light all over your indoor marijuana plants for sure.

However, the inclusion of more IR LEDs means that Viparspectra wins the battle between the companies when it comes to comparing the spectrums.

Coverage capabilities of both the brands:

This is one more very important aspect that you need to address before buying any LED grow light from the market for your indoor marijuana plants. In order to compare the coverage capabilities for both the brands, we are going to be considering the Viparspectra reflector series V900 and the Mars Hydro reflector series 960W grow light.

After the research, we found that as we take the coverage capabilities of both the LED grow light are going to be providing you with similar coverage. You read it right, both the LED grow lights from both the manufacturers are going to give you a coverage area of 4’ X 4’. However, the only difference here is that the Mars Hydro reflector series 960W grow light is going to be taking just a little bit of more electricity while giving the same area of coverage when compared to the Viparspectra reflector series V900. 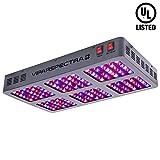 However, with the Viparspectra reflector series V900, you will need to change the height of the Grow light as your plants are growing. So if you truly are concerned about the coverage then you can decide by the following factors between the two grow lights. If you are alright with your grow light taking in more power than Mars Hydro has a plus point and if you are not worried about the single time height adjustments then Viparspectra has a point in this feature consideration.

Here, we have arrived at one of the most crucial aspects of a grow light which is constantly neglected by beginners in the indoor marijuana growing industry. There are a lot of people when they enter this market who are willing to pay lower money upfront but they all end up paying for it in the long run because of the increased electricity bills every month.

Yes, this means that the electricity required is going to be varying from model to model as all four of them consists of different amount of LEDs. You are going to be required to decide between the grow light which one you actually prefer according to your requirements.

Warranty and the budget factor for Mars Hydro vs Viparspectra:

Both of these brands are very well known for their customer satisfaction and the product affordability in the market for a long time and both the brands have created quite a big following for each of them in the process. In order to provide absolutely worry free experience for their customers, bot of the brands are going to be offering three years worth of manufacturers warranty. Not only this, but both the brands are also ready to provide their customers with an impressive 30 day satisfaction guarantee period. This means that if you are not satisfied with the product for any reason whatsoever, then you will be able to return the grow light back to the manufacturer and get all your money back if you return the product within the first 30 days of purchase.

When we come towards the pricing of the products done by both the manufacturers, it is going to vary from model to mode and we believe that the ricing has been done correctly considering the different features on the different models both the companies has to offer. This means that what these companies are charging for their products is more than just fair for the customer and the products are definitely worth spending money upon.

We would like to recommend our readers to list all the important features to them on a checklist and based on the checklist, you will be able to find the best model for your indoor marijuana growing setups. We would also like to mention that please do not compromise on power efficiency for a cheaper grow light as it is definitely going to become a headache in the long run as you will be needed to pay more and more electricity bills which could have been reduced if you had selected a power efficient LED grow light.

If you are still confused about which of the manufacturer you want to buy your LED grow light from, then give us a chance to clear things up even more. We recommend that you find out how much coverage area you need to cover and then look at the variants from both the companies which are suitable for that coverage area. Once you have shortlisted the grow lights that will give you your desired coverage area, now all you have to do is think about all the aspects that are going to matter the most in a good LED grow lights such as the wattage, spectrum, dimensions, inclusion of UV and IR LEDs, etc.

We hope our comparison between the very well known companies has helped you to decide with which grow light you want to buy for your indoor marijuana plants. Share us with which of these grow lights you decided to purchase and why in the comments section below.

Mars Hydro vs Viparspectra? Which grow light to buy? Read this in-depth researched article and explore the best possible comparison between them.

The 10 Best Stealth Grow Cabinets for Growing Marijuana in 2021